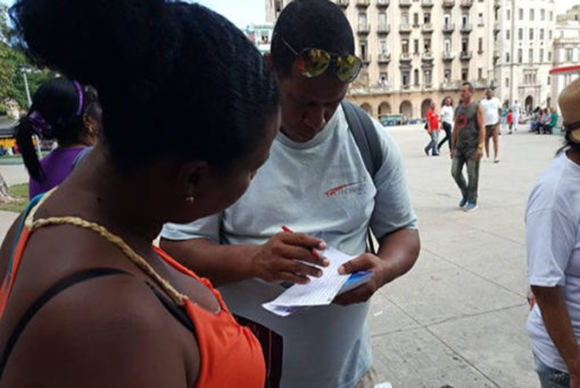 On my last visit to Cuba, Bishop Moises De Prada told me that according to his estimate over 16,000 Cubans have received Jesus as Lord already during the month-long campaign held in early 2017. Over 60,000 people are currently being followed up by hundreds of churches in Havana. Over 100 thousand contacts were reported on the streets of Havana.

The campaign has created a real buzz, impacting the Havana in a way similar to the buzz in Jerusalem on the day of Pentecost before Peter got up to speak. Worried government officials have repeatedly called in church leaders and our "Power For Transformation" campaign office managers for "consultation."

There are many reports of whole families that have come to faith. An army Colonel had visited our campaign call center and asked an on duty pastor to pray for him. He wanted to receive Jesus. The pastor was reluctant at first knowing that military officers and policemen are not allowed to connect with churches in uniform. But the Colonel insisted that they pray then and there and he called his whole family. The whole family came and was saved that day, says Bishop Moises.

The whole family was in church the next Sunday. There are many similar reports. Last Sunday morning Pastor Moises saw over 300 new people attending morning worship.

The Grand Witch Doctor of Havana having received Jesus assembled all his subordinates and associates in the city. Each was given the campaign book with the "8 Stories That Can Change Your Life!" The grand master of witchcraft encouraged his followers to turn to God and forsake their "dark" practice. Several more witch doctors have come to faith in Christ and destroyed their "idols and tools of the trade"!

The campaign has included outreach to different segments of society by way of concerts, sports events and children's outreach. The poor, the sick and those in prison were also ministered to.

The main campaign tool—the 150,000 copies of the campaign book were depleted in record time. But the harvest has been overwhelming. The churches have asked GCM Ministries to supply them with another 150,000 - 300,000 books as soon as possible. The new edition will include the Gospel of John.

News of the campaign in Havana has spread to other cities in Cuba. Though the visible media portion of the campaign has discontinued volunteers continue to minister one on one with tens of thousands of people, using the campaign book as a tool of evangelism. Follow up and discipleship has commenced with those who had responded earlier in mid February, March and April.

This historic part of the Cuba campaign came to a close at a special Celebration and Praise event in Havana in May. During the celebration we heard from those whose personal testimony was used in the campaign media. Church leaders also shared their reports of how the campaign has impacted and blessed the churches with new believers. At GCMM we greatly rejoice in the wonderful things God has done during this campaign in this island nation!
(complete story in PDF, more photos here)

Please pray for this special time of  “Harvest in Cuba,” for multitudes who do not yet know Jesus. Please pray for the churches as they reach out to their countrymen, despite the opposition. Join us and be a part of this great harvest.

You can make your tax-deductible gift to support this outreach campaign at our online donation page.