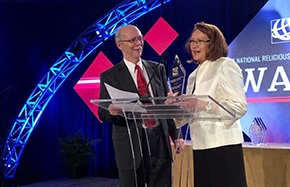 The NRB International Television Ministry Award is presented to an organization based outside the United States that excels in television or video ministry, exercising integrity and faithfulness to the cause of Christ, while demonstrating unusual effectiveness in impacting the target culture with the Gospel.

Laura Haukka is the Co-Founder and Vice President of Great Commission Media Ministries, also known as IRR-TV (in Europe and Asia). This organization is having worldwide impact for the Gospel in Russia, Asia, and the Middle East. For more than 30 years, Laura – together with her husband Hannu – has ministered to millions throughout the former Soviet Union. During the last decade, they have used a comprehensive strategy of major media to saturate major cities of the world with the Gospel and to introduce hundreds of thousands to the hope found in Christ. Laura Haukka is also Co-Founder and Programming Director for ALFA TV, a nationwide television channel in Finland, proclaiming the Gospel to every home.

In 2005 NRB awarded the International Ministry Award during the 62nd Annual Convention in Anaheim, California, to Hannu and Laura Haukka on behalf of GCM Ministries.

* NRB (National Religious Broadcasters) is an international association of Christian communicators with over 1400 member organizations representing millions of viewers, listeners, and readers. The Association exists to represent the Christian broadcasters’ right to communicate the Gospel of Jesus Christ to a lost and dying world.