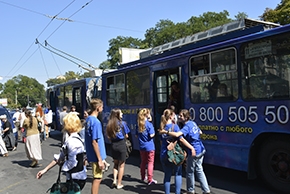 All in all the Mumbai campaign is a challenging one, GCM Ministries most challenging mega city campaign to date. The campaign is in three languages Hindi, Marathi, English. Over 300,000 special evangelistic campaign books have been printed and are out for distribution to those who have requested it. Mumbai 2013 pdf

The first mega city campaign in India ended on May 15th. The call center received almost 93,000 calls in the month-long outreach. 45,000 of people requested the 100-page campaign book containing life changing testimonies and the four steps of salvation. More than 805,000 visits to the campaign website were logged. Erbil, Iraq 2013 pdf

2012 Nepal – A Christmas present for Nepal

The Spirit of God is blowing in the Himalayas. Two simultaneous mega city campaigns in Pokhara and Biratnagar in December 2012 through January 2013 have touched almost 5 million people with the Gospel.  Nepal 2012 pdf

The first mega city campaign in India ended on May 15th. The call center received almost 93,000 calls in the month-long outreach. 45,000 of people requested the 100-page campaign book containing life changing testimonies and the four steps of salvation. More than 805,000 visits to the campaign website were logged. Chennai 2011 pdf

Calls to call center top 3,000 in this developing country. Over 450 callers received Jesus as Lord over the phone lines alone. GCM Ministries, together with 100 Guyanese churches reached the 800,000 residents of Guyana with the Gospel through daily television and other media. Guyana 2010 pdf

The 30-day campaigns are just the tip of the iceberg—once the Christ centered messages in the ads and the television and radio programs disappeared, the churches have an enormous task to meet all those who responded. 14 simultaneous campaigns 2009 pdf

The only TV channel to offer airtime during the city campaign, is located near the top of a mountain. The broadcasts cover most of Uzbekistan’s Fergana Valley. An estimated 6 to 8 million people reside within the footprint of the Channel’s TV reception. The valley is one of the world’s most densely populated regions on earth. Kyrgyzstan/Uzbekistan 2008 pdf

The word has spread outside of Russia to neighboring independent countries that used to be part of the Soviet Union. The mega city campaign was a joint outreach with almost 100 churches in Kiev. This is a fine example of “faith on the move”. Kiev 2007 pdf

GCM Ministries led an historic mega city campaign in the Islamic Central Asian city of Almaty in February/ March of 2006 together with 100 local churches. For seven weeks straight 72 evangelistic programs were telecast on 2 secular TV channels prime time every night to over 12 million viewers throughout Kazakhstan. Almaty, Kazakhstan 2006 pdf

Undoubtedly one of the most significant evangelistic events to ever take place in northern Russia. Archangel 2005 pdf

1 million of the city’s residents were targeted with the message “God gives you the power to change!” All available media were harnessed to simultaneously proclaim this message over a one month period. Thousands called the campaign hotline for counselling. Many made a life-changing decision for Christ. Ufa 2004 pdf

Volgograd – A major city in southern Russia, formerly known as Stalingrad. 50,000 people reportedly made their personal decision to receive Christ…

The campaign changed the atmosphere of the entire city and touched the lives of one million residents as never before…Lives were transformed. Over 110,000 personal contacts were established. Volgograd 2003 pdf