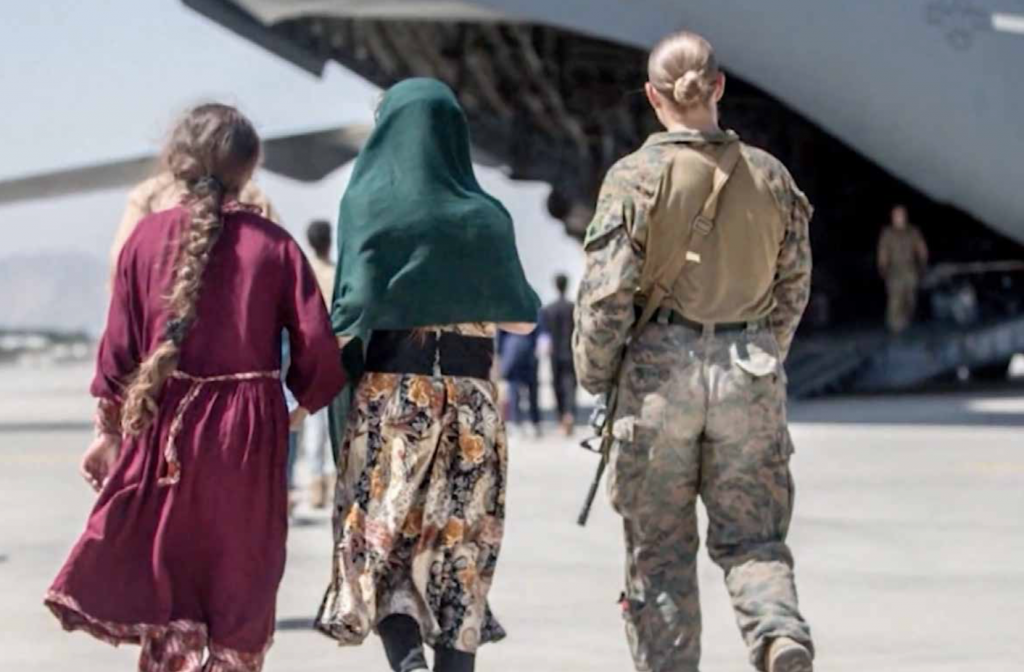 Among the thousands of citizens who fled the country were a few Afghan Christians. Only a few got on the planes. In the photo, a mother and daughter are escorted to the plane. There is no information about the father and other members of the family.

The Taliban took over Afghanistan in August resulting in unparalleled danger for Afghanistan believers. Hundreds of thousands of others succeeded in fleeing the fighting. One fleeing Afghan journalist reported that Taliban soldiers were going door to door, forcing families to give up their daughters, some as young as 12 to be sex slaves for the fighters.

Many Afghan Christians have sought to flee to neighboring countries. Some are in hiding or have sought refuge in other parts of the country in an attempt to keep out of reach of the Taliban. It’s almost impossible to obtain visas from neighboring countries. For many weeks the only way out of the country was by air and flights were full. We have been hearing different stories from areas currently controlled by the Taliban.

A few days ago, GCMM received a tragic message from an underground group in Kabul.

We were in touch with one of our sisters of faith yesterday evening by phone. They were in Kabul, gathered together for a prayer meeting at home. Her last words were: “We feel the power of your intercessory prayers. We are experiencing how a supernatural strength has come upon us. We are singing in the powerful presence of the Holy Spirit. Amidst the danger, my children said to me, Mom, we are not going to deny Jesus!”

Soon we heard shouting and then shots being fired. Then the line went dead. Taliban fighters had invaded their home. Our friends had paid the ultimate price with their lives because of their faith.

Words from a Hymn, written in memory of martyrs of Christ:

These are dressed in white
and they are crowned with crowns. They
are rewarded

and
their tears
have been wiped away.

to Glory
to forever
be with their King. Never again
to experience the pain
of war

Under previous Taliban rule in 1996-2001, Afghan Christians knew of few if any other believers in the country. After western forces liberated the country led by the US military, the Taliban was removed from power. In the following decades, the Afghanistan church grew from a community of unknown, secret worshipers to a church of about 8,000 believers. That however came to an end in August of this year.

At a safe house in Kabul, Jaiuddin (not his real name) is hiding with 12 other Afghans after the Taliban took over the city. “One of us is always awake during the night, walking and praying in case the Taliban comes knocking. In so doing, we have time to warn others.” Jaiuddin and his group are part of a small Christian community. They told us they don’t have passports or US government-issued exit documents. Their hopes of escaping are minimal at most.

Sarah, another member of the group adds: We had plans to proclaim the Gospel with our brothers and sisters in this country, but the Taliban took over sooner than anyone thought. It all happened so quickly. Now, we have become ‘targets’, we are known to the Taliban. Jaiuddin: “I receive calls every day, warning me that if I am found, I will be executed. I am not afraid of dying, I just ask for intercessors to pray for my country.”

While international believers are focused on assisting people to escape, many belonging to the underground movement of believers want to stay in the country. Jaiuddin: “We pray for each other, that the Lord would set His angels around our hiding place to protect us.” Prayer is the only thing that we can do at this moment. So, we pray. People that I work with wonder, ‘Where God is in all this?’

The Psalmist asks, ‘Has God forgotten us? Oh my God, how long, how long, Oh God’? We have seen how churches in Afghanistan have grown, and now we are witnessing their collapse. We sigh fervently and lament with intensity, as did the writer of the Psalms. Laments do come to an end in the Psalms. They put their trust in the fact that God reigns and is in control of His kingdom. We continue our life’s journey in His kingdom.

An appeal for Christian TV programs in the Dari language had come from Afghan believers who were able to flee Afghanistan in August.

We heard their plea at GCMM and in October, the production of Gospel programs was launched. The Dari language is spoken by 50% of the population. Dari is the Afghan dialect of Persian and as such is sometimes referred to as “Eastern Persian”. Dari serves as the lingua franca of Afghanistan.

These satellite TV broadcasts can be seen in homes throughout the country.

Believers who fled the country are now assisting GCMM productions teams as hosts and speakers, as well as providing music. Many Afghan believers have found refuge in Europe. From there they travel to the GCMM Ministry Centre in Finland for program production.