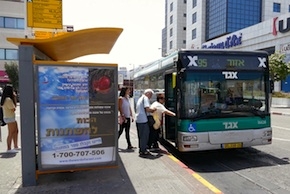 Hebrew-language media saturation campaigns have been conducted in central Israel in past years. The campaigns reached over 2 million people in 40 cities, from Tel Aviv to Jerusalem. These media campaigns in Israel ministered to almost one million Russian speaking Jews using newspapers, billboards, social media, and radio.

A closing concert was held for each campaign for those who wished to hear more of the Gospel.

Previously similar media outreaches have been conducted in Jerusalem, Tel Aviv, Haifa, Nazareth, Beersheba, and West Bank cities, in three major languages spoken in the country: Hebrew, Russian and Arabic. Approximately 3 million Sabra Jews had a chance to hear the Gospel over a 4-week period. Eleven new messianic Jewish congregations have been formed as a result of these outreaches. Several of these congregations have been planted among hearing-impaired Jews.

Although 5.4 million Jews live in Israel, only 25% of the population is religious. Most have drifted away from their Jewish faith. And only 5 to 10 thousand believe in Jesus.

During the Evangelistic Media Saturation Campaigns, there were 240 buses that drove daily throughout the downtown cores, displaying ads that proclaimed the message: “He changed me”. Giant billboards are up in the city of Haifa. The same message is broadcast through local radio spots and seen on Hebrew web pages.

Each of the 3 cities had their own call center, manned by local church volunteers, set up to receive calls from people responding to the campaign message. Every person who called in for spiritual counseling received the campaign book containing the 4 steps to salvation.