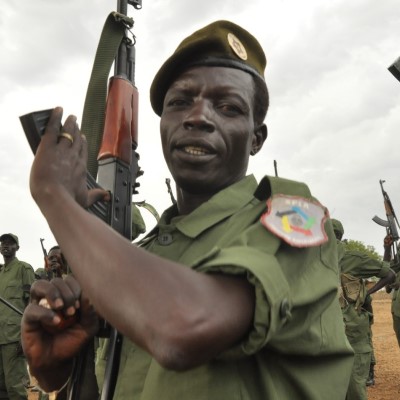 Ever since civil war broke out in South Sudan, over 383,000 people have died. Around half of the lives lost are estimated to be through violence. Those killed were mostly adult males, but women and children have tragically been slaughtered as well.

Other nations gather in South Sudan to deliver humanitarian aid. However, one in three of the major violent incidents take place against aid operations. Record numbers of humanitarians are being killed by gunfire, and other violent attacks include physical assaults and armed robberies.

For the third consecutive year, South Sudan has been declared the most violent place in the world for aid workers.

It’s clear that this country needs much more than humanitarian aid. They need the heart-changing Gospel of Jesus Christ.

“This country needs much more than humanitarian aid. They need the heart-changing Gospel of Jesus Christ.”

In God’s kindness, South Sudan is now receiving a message they have never heard before: “God gives the power to forgive.”

Great Commission Media Ministries is airing this life-changing message two to four times a day on the radio and TV. Right now, testimonies of God’s salvation are pointing millions of the South Sudanese to the forgiveness of Jesus Christ.

We are also proclaiming this message through city billboards, bus signs, and posters – every communication platform we can get our hands on!

A Sudden Change of Heart

One South Sudanese general saw our billboard outside his office with the message “God gives the power to forgive.”

It struck him, and he began feeling torment in his soul.

He had ordered his subordinates to kill a large number of people during the war, and his sins were now weighing on him.

Hungry for relief, he called our campaign phone number and began asking a pastor about God’s forgiveness.

“He did not have to pay for his sins because Jesus already paid for them on the cross.”

Great Commission Media Ministries continues to broadcast testimonies like this one throughout South Sudan.

Once someone watches or reads a testimony of God’s power to forgive, they are invited to call our ministry to receive a Power to Forgive book. This book has many more testimonies and the road to salvation according to the Scriptures. A local church member hand-delivers the book so that the recipients can continue to be discipled in the grace and knowledge of Jesus Christ.

Our prayer is that we would get enough for the tens of thousands of people who are responding to this campaign. We will be in South Sudan for most of 2019, and we have needs for many more Power to Forgive evangelistic books.

You can participate in this evangelistic outreach by donating to GCM Ministries. Each book can lead many to faith in Jesus Christ.

Thank you for “going with us to South Sudan.”

Navalny Speaks Of His Faith

When War Strikes… Where is God And The Great Commission

Churches In Russia Suffer Amidst The Coronavirus Pandemic

Retreat From Afghanistan: The Church Is Left Behind

Report: Ministering Among Jews In Russia

Thank You For Your Partnership In The Middle East