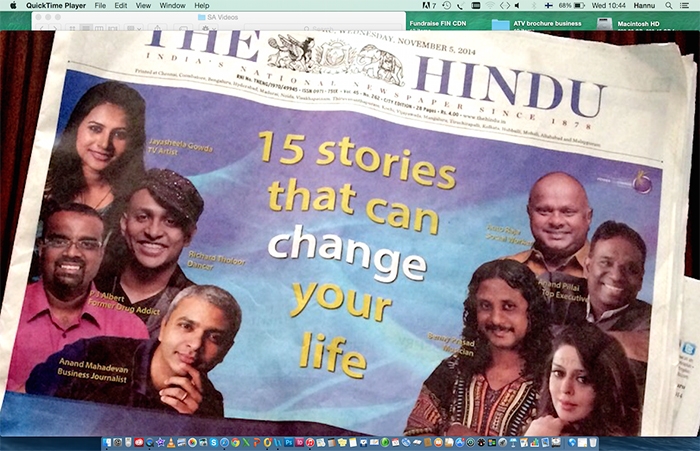 Over 200,000 phone calls came into our call center in Calcutta during the campaign. About 20 million are in the greater Kolkata area.

Poverty creates its own challenges when trying to reach the people with the gospel message. TV and radio are more effective tools for reaching people compared to social media and the internet.

The use of media is very effective in India, with a population of 1.2 billion people.

During and after the campaign people from all walks of society were responding and coming to faith.

Traditional methods of preaching the Gospel by churches is not enough to get the job done, says Hannu Haukka.

The much anticipated Bangalore Mega City Media Saturation Campaign was conducted in November 2014. We received 13,272 calls on one particular day. These calls kept coming into the call center as a result of the media saturation campaign that proclaimed the Gospel message all around the city. The call center was operated by volunteers from 800 participating churches.

East-West Ministries partnered with GCM Ministries in this great effort to reach the people of Bangalore with the Gospel.

The people of Bangalore are hungry to hear the message, "God Gives The Power To Change". On the second day of the campaign, 6,700 book orders were recorded by calls from people who saw the campaign ads throughout the city.

The campaign targeted Bangalore residents with the Gospel via 10 separate TV channels, 8 newspapers in Bangalore, and the major paper in the Karnataka province, over 200 billboards, and almost 100 bus or truck ads. Social media was used heavily to preach the Gospel as well. A dedicated group of people is praying on the rooftop of the call center for the salvation and change through Jesus Christ in the people of Bangalore.

The Mega-City Campaign ads ran through to December 5, however, the call center remained in operation long after that. The abundant harvest of souls from this campaign will continue for years.

Read the detailed report of the Mumbai campaign here.

GCM Ministries' largest media saturation campaign was held in Mumbai November 15 to Christmas 2013. Mumbai is recognized for its entertainment industry and also referred to as "Bollywood".

Nine million people commute to work in Mumbai by train on a daily basis. These jam-packed trains and train stations were ideal locations for our campaign ads with the message: "God gives you the power to change!"

Even though poverty is rampant in the slums many homes have cable vision or a satellite dish. This oddity served the evangelistic media campaign well in that city to help reach the people of the slums with the message of change through Jesus Christ.

A megacity campaign held in May 2012 in Hyderbad exceeded all expectations. Response to the call center surpassed 110,000 calls, mainly from Hindus and Muslims. The churches of the city had not seen anything like this. 60 phone lines were active at the call center.

A megacity evangelistic campaign was conducted in the fourth largest city in India, Chennai (formerly Madras) in the spring of 2011.

During the campaign over 94,000 phone calls came into the call center where pastors and counselors answered the phones.