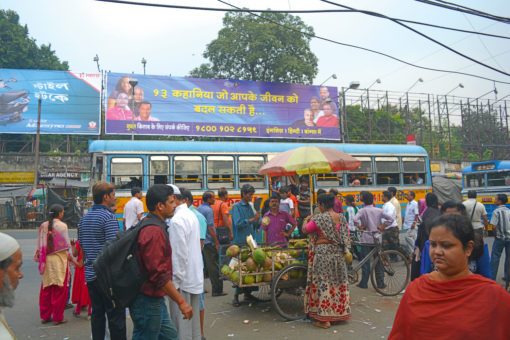 In the 5 weeks of the campaign, 150,000 calls were received and since then a total of 210,000 calls have been logged at the campaign call center. Tens of thousands of Calcutta residents are now being followed up by over 1,000 church volunteers and book couriers who will deliver the "Power To Change" books containing 13 high-impact transformation stories and the roadmap to new life in Jesus. The books are available in Bengali, Hindi, English and Urdu.
The campaign message was seen and heard throughout the city thanks to the 13 transformation stories showcased in all major media for 30 days including billboards, prime time radio, television, daily newspapers, ads in the public transport system, etc. The city has not seen a similar high impact effort reaching millions of people in Calcutta.
As in Jesus' day, the nets in this campaign are breaking from the overflow of fish Not only that but resonding to the campaign are the ultra rich, the middle class and beggars on the street.

The follow-up ministry resulting from the campaign will continue to the end of 2018 at least. 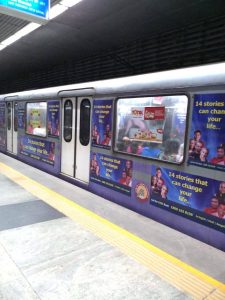 Campaign ads are highly visible during the campaign, such as these on commuter trains throughout the city. Millions of people use the trains daily.

One pastor noted, "We have reached people that otherwise be out of reach of the church. They would never find their way to a church. The transformation stories have profoundly touched the souls of men and women."

As pastors started to see and feel the impact of the media campaign throughout the city many dormant congregations were awakened and snapped to attention.

Overnight,  there was an increase of participating churches from 230 to 328 churches. Almost a hundred new churches showed up.

The onslaught of thousands of calls spoke volumes.  Pastors witnessed the a previously unseen hunger and thirst for change in the hearts of the people of their city.

The same was true regarding the younger generation. Hundreds of young people from churches in the city showed up at the call center to serve as volunteers after seeing the media, the ads on buses, trains, billboards, newspapers.

There is a lot of poverty and crime in this city of over 14 million residents. About 20 million are in the greater Kolkata area. Poverty creates its own challenges when trying to reach the people with the Gospel message. TV and radio are more effective tools for reaching the people compared to social media and the internet.

The use of media is very effective in reaching India's population of 1.2 billion people.

This campaign continues to touch the lives of people in the city. 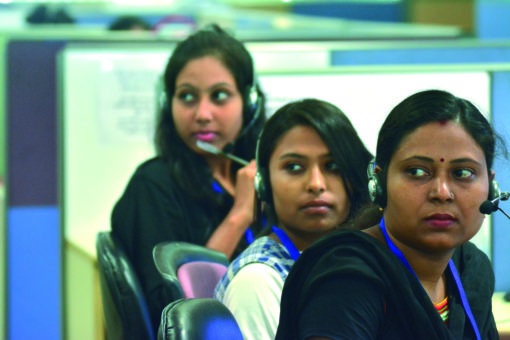 The call center was a busy place, receiving over 210,000 calls in total. People were asking for the campaign book that contains 15 life-changing stories.

GCM Ministries has previously conducted media saturation campaigns in 4 mega cities in India: Chennai, Hyderabad, Mumbai and Bangalore. Because of these campaigns about 100 million people have been reached with the Gospel message. A million campaign books have been handed out to people searching for faith in God. The books have been printed in Tamil, Telugu, Hindi, Marathi, Kannada and English languages. Our stories and ads in daily newspapers have reached 15 million people during the campaigns. Life-changing stories on television channels had a total audience of over 60 million viewers.

Read the latest PDF update from Calcutta, with lots of photos and exciting news. 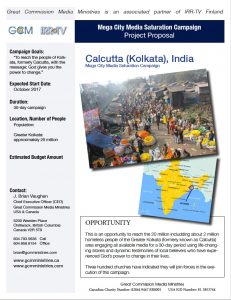